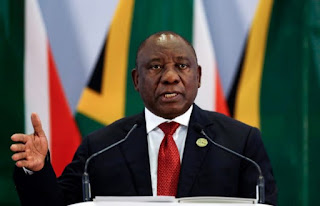 India following the tradition of "ATTITHI DEVO BHAVA", has  been inviting various dignities of foreign countries since the first republic day in 1950.
PM NARENDRA MODI invited president of South Africa His Excellency MATAMELA CYRIL RAMAPHOSA as the chief guest for the REPUBLIC DAY 2019. PM met the south African President at the G-20 summit, and invited him as a chief guest for republic day 2019.
The first chief guest at the republic day of 1950 was PRESIDENT SUKARNO of INDONESIA,  and the list continues till today.
as the tweet by PM MODI says this invitation will strengthen the bilateral relationship between two countries. This year we will be celebrating 150 years of Mahatma Gandhi, and Mahatma Gandhi has close link with South Africa as well.