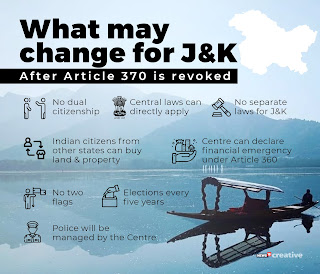 TODAY IS THE REVOLUTIONARY  day in the history of India and the state of JAMMU AND KASHMIR. with the revoke

of ARTICLE 370 AND ARTICLE 35A,  from the Jammu and Kashmir has marked the new beginning for the people there. It not less than the independence day for them.
Even after the 71 years of independence of India this state remained separate from India in the terms of legislative, rules, regulations, rights, various beneficiary schemes of Govt. of India and many more benefits.
Today with the permission of honourable president of India the Home minister of India sh. Amit Shah, introduced the revolutionary bill to revoke the above articles. according to him these two articles which was introduced at that time was brought for the betterment of the people of Kashmir but it failed to meet the need of the people and failed miserably leading to wide spread terrorism, sprouting of terrorist groups and created the difference in the people of kashmir and rest of the India.
As per the new amendments the entire state of Jammu and Kashmir will be divided into two union territories one namely jammu and kashmir(with its own legislative assembly) and the other one will be Ladakh(with out legislative assembly).
KEY CHANGES THAT WILL AFFECTED BY THIS REVOKING OF ARTICLES INCLUDES:

THE WHOLE COUNTRY IS REJOICING AND CONGRATULATING THE MODI GOVT. FOR TAKING THE HUGE DECISION WHICH WAS IN DEMAND FROM MANY YEARS.
achievments of modi govt. National