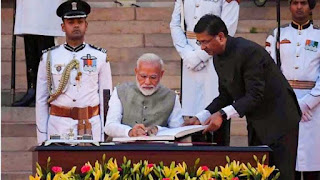 A mega event was held on the evening of 30th may 2019 (Thursday) at the ground of Parliament where Prime minister shri Narendra modi  took oath for the second time as the prime minister of India along with his 24 cabinet ministers.

Leaders of BIMSTEC group were the chief guest  for the oath ceremony. More than thousands of dignities were invited from all over the world  A govt. can has a maximum of 81 members of lok sabha in their cabinet which is the 15% of total MPs.
In this time’s council of minister there are 24 cabinet ministers, 9 independent ministers of state and 24 ministers of state.  The former finance minister Arun Jaithly and former foreign minister Shusma swaraj is not present in the cabinet for this time.

NDA won 352 seats, UPA won 91 seats and 99 seats were won by the other independent candidates. Out of 352 seats BJP won 303 seats. For the second time BJP alone crossed the mark of 272 seats.
People of India has too much positive expectations from the Modi government hoping for the best future ahead and again congratulating the BJP for great success.